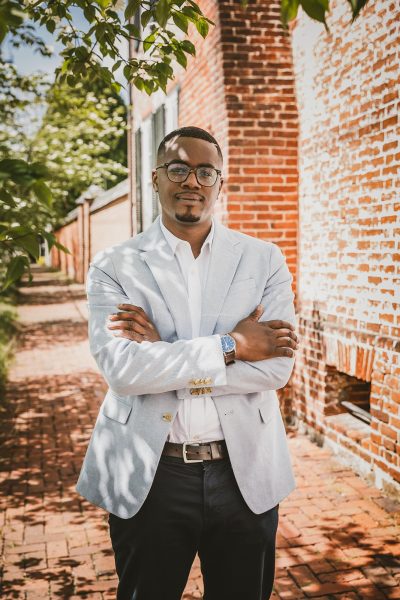 CHESTERTOWN — Ten years ago this month, Kent County High School senior Darius Johnson was awarded a scholarship to Washington College. Now, he has returned to his home county to lead an organization addressing affordable housing needs. It was announced earlier this month that Johnson is the inaugural executive director of Kent Attainable Housing (KAH), which has completed its first home, the Garnet House on College Avenue in Chestertown and is planning its next in Butlertown.

The announcement came nearly 10 years to the day that Johnson’s photo ran in the Kent County News as the recipient of the Kent County Vincent Hynson ’87 Scholarship to Washington College.

As stated in a news release, KAH is a nonprofit organization seeking to “create home ownership opportunities for local, low-income families in need of safe, decent and affordable housing by building or renovating homes,” an effort Johnson is excited to be a part of.

“If people want live and work here, we have to make that possible for them. But we also have to recognize that it’s not accessible for everybody,” Johnson said of home ownership in an interview.

“I just had a really great experience there,” he said.

When he graduated, he was ready to move away, to see what was beyond Kent County. He went to Baltimore, where he went on “a three-year journey of professional soul searching.”

During that time, he realized his heart was in serving people and began what would be a career in the nonprofit sector, including a position with the Maryland Center for Construction Education and Innovation.

Johnson — along with his fiancée — ended up ready to come back to this side of the Chesapeake Bay. He took a position with Eastern Shore Land Conservancy, where he worked for nearly three years prior joining KAH.

“I always wanted to come back to Kent County and do something for the community. Especially since I got the Vincent Hynson Scholarship. As

soon as I got that, I knew that I had to hold up to it and give back to the community in the way that they gave something to me,” he said.

“I’m just grateful for this. I’ve been waiting for it for a long time.”

KAH President Lani Seikaly, in announcing the organization’s new executive director, said the board “felt Johnson’s prior leadership experiences, innovative problem solving skills, demonstrated ability to form partnerships, and passion for making homeownership an equitable opportunity and a strategy to break the cycle of intergenerational poverty all made him the perfect executive director for Kent Attainable Housing.”

Johnson said that historically, there has not been much in the way of local organizations working to address housing issues here. He said KAH has 40 applicants wanting to enter home ownership. Many of those applicants are people he knows, including family members and friends.

He said the broad vision of KAH is to get those 40 families into home ownership.

“Sometimes all they need is just an organization like ours just to come in and take that next step or to help them put up some safeguards around the way that they are living to stay on the right track toward home ownership,” Johnson said.

Johnson also spoke the per capita impact adding 40 families into home ownership would have on the county as a whole — “from workforce development to education to health to economic development, just getting new taxpayers onto the books makes that big a difference.”

He said there are huge gaps in land ownership on the Shore, as well as how funds are used for conservation. He thinks even those involved in local conservation efforts are recognizing that there needs to be some balance.

“And the housing is a key foundation of that,” Johnson said.

He spoke about how young people who grew up here and want to work here have been priced out of home ownership.

“There has got to be some way to preserve that affordability. In the models that we are exploring for home ownership, that’s going to be a big part of that — just figuring out how we can reduce the cost of home ownership or just pull in more funding, whether its private sources or state sources or federal sources, to offset those costs,” Johnson said.

“Darius has consistently been an advocate for those that are underrepresented so it is clear his heart and head are in the right place to lead Kent Attainable Housing into the future. His passion for the community and his steadfast commitment to the mission of Kent Attainable Housing is the type of transformational leadership Kent County needs,” Shoge said in a statement.

To learn more about the Vincent Hynson Scholarship to Washington College, go to enrollment.washcoll.edu/register/vincenthynson.

Please support Kent Attainable Housing’s mission during this exciting time for the organization. Your contribution will help us meet a critical need for Kent County’s working families.